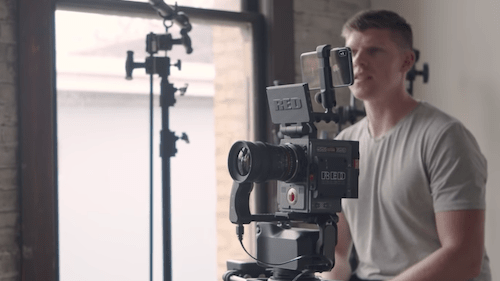 2387 Views Posted on: 02/08/2019
Rhino Camera Gear is one of the well-known camera slider companies in the filmmaking industry. You probably know about the Rhino CG brand already and maybe used their Rhino Slider EVO with Rhino Motion with or without the Rhino Arc. Their users have been delighted with the production value the genius Rhino Slider EVO system brings. We all know that the "camera movement" is one of the first things you have to have for creating drama and express a specific perception or feeling. If you are interested in using the "camera movement" and considering buying a manual or motorized camera slider system, Rhino offers what you need at affordable prices in different bundle setups.

Kyle, the CEO of the Rhino Camera Gear LLC have been into filmmaking for a very long time, and in 2011 he came up with the brand's first product Rhino Steady. Thanks to the Rhino Steady Kickstarter campaign, they motivationally and financially had an opportunity to work on their new idea; Rhino Slider. The first version of the Rhino Slider brought a new approach that friction-based and roller bearing sliders did not have. The ultimate goal was creating a quiet, affordable, smooth, and easy to maintain camera slider. The Kickstarter project of the first-generation Rhino Slider was very successful. Their marketing move with the "Rhino Slider Drops from Space" was an exciting and entertaining view. I always recall this video when I see their first-generation slider, which proves that it was a very successful viral video!

Kyle and his team never stopped listening to user feedback and the filmmaking community. They recently came up with the improved version of their Rhino Slider EVO system. The main focus was building the Rhino ARC from scratch and making it the most versatile camera head in the industry. This time the goal was creating a 2-axis system with a pan-tilt head with an optional follow focus not only for a slider but also to be used on a tripod. When you use it on the slider, it offers a 4-axis solution with automatic slide, pan, tilt, and focus. With the new Rhino ARC II, they also introduced the latest version of the Rhino Motion called Rhino Slider Motor in two different speed options (high-speed and high-torque). And of course, they did not forget to perform a couple of touches to the Rhino Slider system for making it perfect and more versatile. The quick-mount system is the most outstanding mechanical improvement in Rhino Slider design. Check out the full video of their Kickstarter launch video to see and learn more;


Although Rhino Camera Gear launched the Kickstarter campaign of the ARC II in November 2018, they haven't fulfilled the orders of the backers yet (as of early August 2019). The fulfillment was supposed to be done in May 2019. However, a couple of months of delay in this industry is more than acceptable. The perfectionist approach of Kyle and his team will make sure that even the very first batch of the Arc II will be flawless. As Kyle keeps providing frequent updates on the development and manufacturing process of the ARC II, the backers and pre-order buyers are appreciating his honesty and perfectionist approach.

Throughout the development of the Rhino ARC II they also implemented a new feature called "Automatic Face Tracking". He states, "this feature uses your iPhone to automatically track your movement and keep you in the frame. You can set the tracking speed to adjust the look of the tracking and choose where you want to be in the frame. There's a looping mode that allows you to track subjects during interviews, so you no longer have to set up keyframes. Just press start and you're good to go even if your subject moves. " Here is the official video about the "Automatic Face Tracking".