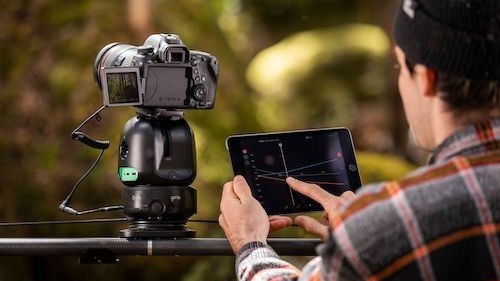 It fits right in my backpack. Believe it or not, that was my first thought when I saw the Syrp Genie II. They are offering a professional motion control system, and it's almost smaller than a lens? Am I missing any parts? How well would this work? Well, we’ll see about that in a minute.

As we have seen in other camera motion control systems, the Syrp Genie II is a modular system that consists of two separated devices:

- The Genie II Linear, which allows you to make linear moves (straight travelings)

- The Genie II Pan Tilt that, well, pans and tilts the camera.

Let’s break them down.

The Genie II Linear works over a rope system. If you have never used one, imagine tying a rope very tight at both ends and having your camera sliding across. Of course, you'll have to provide the camera with a surface to move over on, but any slider would do this. Also a skateboard or even your son’s scooter toy - I wish I had taken a picture that day -. In my experience, a rope system means a reliable, adaptable (you can always buy a longer rope) system that you can make wonders with if you get creative.

Now, as for the Genie II Linear specifically, it runs very very smoothly and it’s surprisingly silent and precise.

The Genie Pan Tilt device can work on its own or be mounted on top of the Linear - actually, you can even buy them separately-. The interface is very intuitive and easy to set up, and you can do it on its integrated interface or you can do it with your phone with the app. It might lack some advanced and complex options other devices have, like multiple modes, but truth be told, I don’t think you’ll ever need them: There is no camera movement you can’t set up with a little time or experience (you’ll only need one of them to get it right).

The Genie Pan Tilt flows just as well as the Linear alone. Quiet and accurate, it can load up to 6kg (13lbs), which will allow you to mount almost any gear out there. It's worth mentioning, however, that the load is lowered almost by half (3.5kg or 8lbs) when you tilt the camera beyond a certain angle.

So both modules work great, and the fact that they can be mounted on any other gear you might have, makes the Genie II super versatile. You can upgrade your gear without having to invest in a new control movement system.

Shooting a time-lapse is very easy and you get amazingly smooth results, meaning there is no shaking or track variations on different takes. Setting up any movement is quite simple and it comes with some cool features, like repeat cycles or easy-in and easy-out movements, all while controlling each axis independently.

The app keeps receiving upgrades, so they are still adding new features every now and then.

By the way, Syrp now belongs to the Vitec Group. Although you might have never heard of them, they already own some brands you surely know, like Manfrotto, Taredek and SmallHD. In a way, it gives you some confidence you will continue to receive support and upgrades.

Finally, the battery on both modules will keep them running for several hours, so I don’t think it would never be an issue, provided you remember charging them before starting to shoot.

So, in sum, I’ll break it down into a very simple version of the pros and cons.

Contras: It is expensive.

Pros: It is worthy.