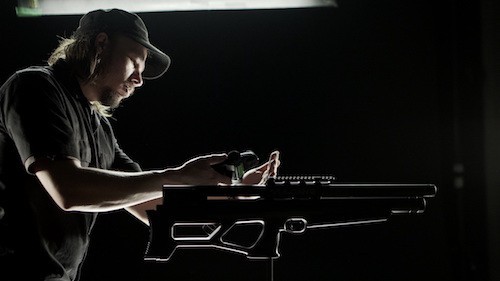 The first in our row of projects this year is the commercial my friend and fellow cinematographer Gleb Volkov shot for Airgun Technology.

On this shoot, we got really creative with our camera slider and came up with a simple, carefully selected setup. The concept was very clean and clear, befitting the optics of the product we were shooting - the new Vulcan 2 rifle.

It takes a certain amount of creativity to display a product like this in a way that highlights its features and overall aesthetic, without being too monotonous, or on the flip side, building a story around it that may create too much drama that distracts from the product. Gleb solved this incredibly well through his lighting, and the movement concept he had throughout the entire piece. The camera varied between static shots and motion-controlled slider shots, while the rifle itself also moved, either on a rotating stand, or by attaching it to the motion control unit and programming its movements, while the camera was static on a tripod.

Without both the slider and motion control technologies, it would not have been possible to pull off these shots with the outcomes we ended up getting. Booking a large motion control setup way beyond the budget, so with some planning and testing, we came up with the following alternative setup, which got the job done.

Our camera was RED Epic Helium 8k, equipped with Zeiss CP2 lenses, and a C-Motion wireless focus kit. Amongst many other criteria, an important factor was that the camera setup would need to work with the iFootage S1A3 Motion Control unit, on the Shark S1 slider. After a slider test, including recording few shots and processing them in post, some additional research and several tests for lighting, framing and movement, the project was shot, processed and delivered shortly afterwards to a very happy client!

Here is the final result:

Check out the iFootage Complete S1 Slider Bundle we used!